Marischa Slusarski is an interdisciplinary artist whose individual and collaborative projects have evolved in form and medium over the years, resulting in a body of work that challenges traditional boundaries. She has pursued a successful gallery career exhibiting paintings, sculpture, photography and digital media in the U.S., Europe and Asia. Her work is represented in museums and institutions as well as in many private and public collections. She has been written about in numerous print and online publications and her artworks have been featured in film, television, theater and rock concert set design. 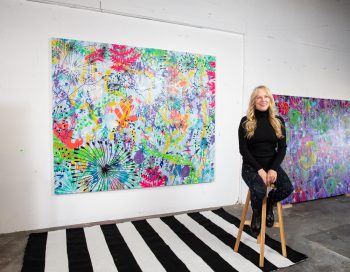 1. What’s your strongest memory of childhood?

My grandmother’s farms provided two strong memories… the time I climbed  up into the corn silo, took off all my clothes, and buried myself in the corn. I then charged my cousins 25 cents each to watch me wiggle out of the corn, snake charmer style. Also the time I mounted a giant steer, because my sisters told me it was a horse and rode it through the high corn, almost killing myself when I fell.

2. Describe a real-life situation that inspired you to create?

Summers in boring suburbia, Denver, Colorado. We sold tickets to summer carnivals and plays that we organized with our neighbors. One play was called, “Who Stole the Golden Goose?” and it featured a mustache twirling villain, a goose and a heroine. I designed all the costumes for the plays and made all the architectural structures for the carnivals. I also made the most elaborate Barbie kingdoms and sewed all their clothes.

3. What is your first memory of making art?

I drew a picture of two half rabbit/half human amalgamations kissing and my dad whipped me with a belt because they were also half naked.

4. How did you decide on art as a career?

It was in my bones. I knew I had to risk my personal piggybank and future retirement fund to become a non-commercial artist. But I also had to pay my bills, my studio rent and buy art supplies. So after graduating from college, I took a series of jobs that were no-brainer intangibles or what I called “gold-bricking” jobs. I often locked my office door and napped on the job, so I could work all night on my paintings. I wrote splendid sales proposals that I knew would never come to fruition in order to keep a fakey-ass job and the money coming in as long as I had my bosses fooled. Some might consider that bad karma, but I justified the strategy to become what I knew I had to be. It was literally physically painful being away from the studio for even a few days. 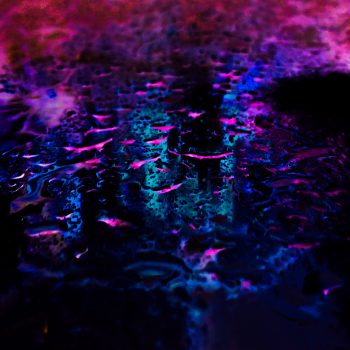 5. What’s integral to the making of your work or of you being an artist?

Being around other artists. Not creating in a vacuum. Constantly changing. Collaborating. Curating. Exotic residencies in other countries.

6. Could you please tell us about your creative process – from initial thoughts to completion?

That’s a hard question. The creative process is different each time. Often it is a blueprint created digitally in layers, other times it is searching online for tools to manipulate and push paint through. Sometimes it is sculpting creatures who are photographed and end up in paintings. Initial thoughts usually happen as either light bulb moments or ideas that marinate for days. I often come up with ideas at night, half awake, in a semi-dream state.

7. What work do you most enjoying doing?

I don’t enjoy, or dislike, I just do.

8. How has your practice changed over time?

During Covid I realized I couldn’t just lay around all day watching Netflix. I needed a job. I was invited to teach a visual arts lab via Zoom and interacted with all kinds of artists, illustrators, weavers, jewelry makers, and more. This became a springboard to create abstract work for the first time, using zany tools and utensils and breaking all my own rules. The pandemic and my single occupancy studio allowed me to realize this dream. I had been wanting go abstract for a long time. 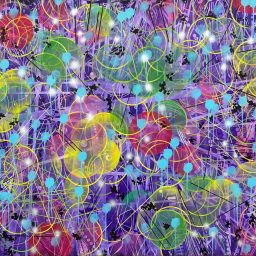 9. To date, what is your most memorable piece or project?

I moved to London in 2000 where I designed a work-study program and collaborated on a photographic project which involved sculptures cavorting in a diorama style landscape. I didn’t have a green card or a work permit or a bank account, but when I told the owners of the flat I was renting that I had sold paintings to some very famous actors, they let me pay with a credit card.To be in London as an American artist without an MFA was daunting. It took all my courage to black cab our photos to fancy galleries and pitch shows. In the end, we had numerous solo and group shows. My collaborator was a journalist and we got a ton of press. I also had a brainstorm to persuade the owners of the hair salon I lived above if I could start a gallery in their basement. I called it Underbelly, and it was located in the heart of the fashionable east end arts district. It was all going well until I got kicked out of the country for overstaying my welcome.

Additionally, I started NAMAAK, an international artist collective in 2013 with another artist friend. The unconventional aspect of the collective was that all the artists were fake. We created all their work and back stories and manned all their social media, designing Facebook pages, Instagram accounts, Twitter feeds, and more. We even risked not telling the owner of the Los Angeles gallery about the “performance” portion of the show until two weeks before the show opened. It turned out to be a huge hit. We had subsequent shows in Beijing, and Hue, Vietnam.

11. How would you describe the current art scene in LA?

12. What do you like about the art world/ or art community?

I think the scene in L.A. is very fertile, very robust. The more I challenge myself and take risks, the more I meet incredible artists and people who care about artists. I also try to take care of other artists and to advance their careers. Paying it forward is very important. In general, I think Los Angeles is a very supportive environment. 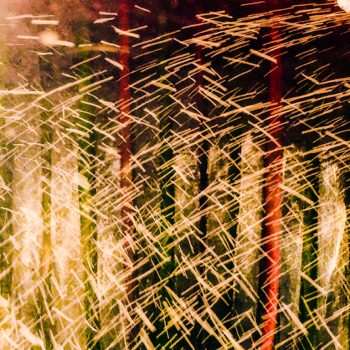 13.Which creative medium would you love to pursue but haven’t yet?

14. What is your dream project?

Build a gigantic artist studio in a beautiful forest in another country and have workshops and residencies to help inspiring artists from underserved communities.

15. Could you tell us about forthcoming projects/exhibitions?
Martin Durazo and I are planning Electric Banana Koolaid II. And I’m currently not allowed to talk about it.
16. What food, drink, song inspires you?

17. What superpower would you have and why?

The ability to paint like DaVinci and sculpt like Michelangelo, just in case I start making representational work again. I could always dumb the power down, but it would be a good starting point for a new body of work.

17. Name something you love and why,

Rain. I think the negative ions fire up my creativity.