For our August installation of Meet the Artist series, D2 Art is very excited to feature both Eric Zammitt and Sharon Shapiro, two long term and incredibly prolific artists. Both of these artists deal with incorporating various visible and underlying dualities in their work but each do so through distinct and differing subject matters, methods and results. Yet for all their variance, both Zammitt and Shapiro reveal a true love of form, whether it be figurative or geometric, and wonderfully utilize color to its fullest in their respective works. 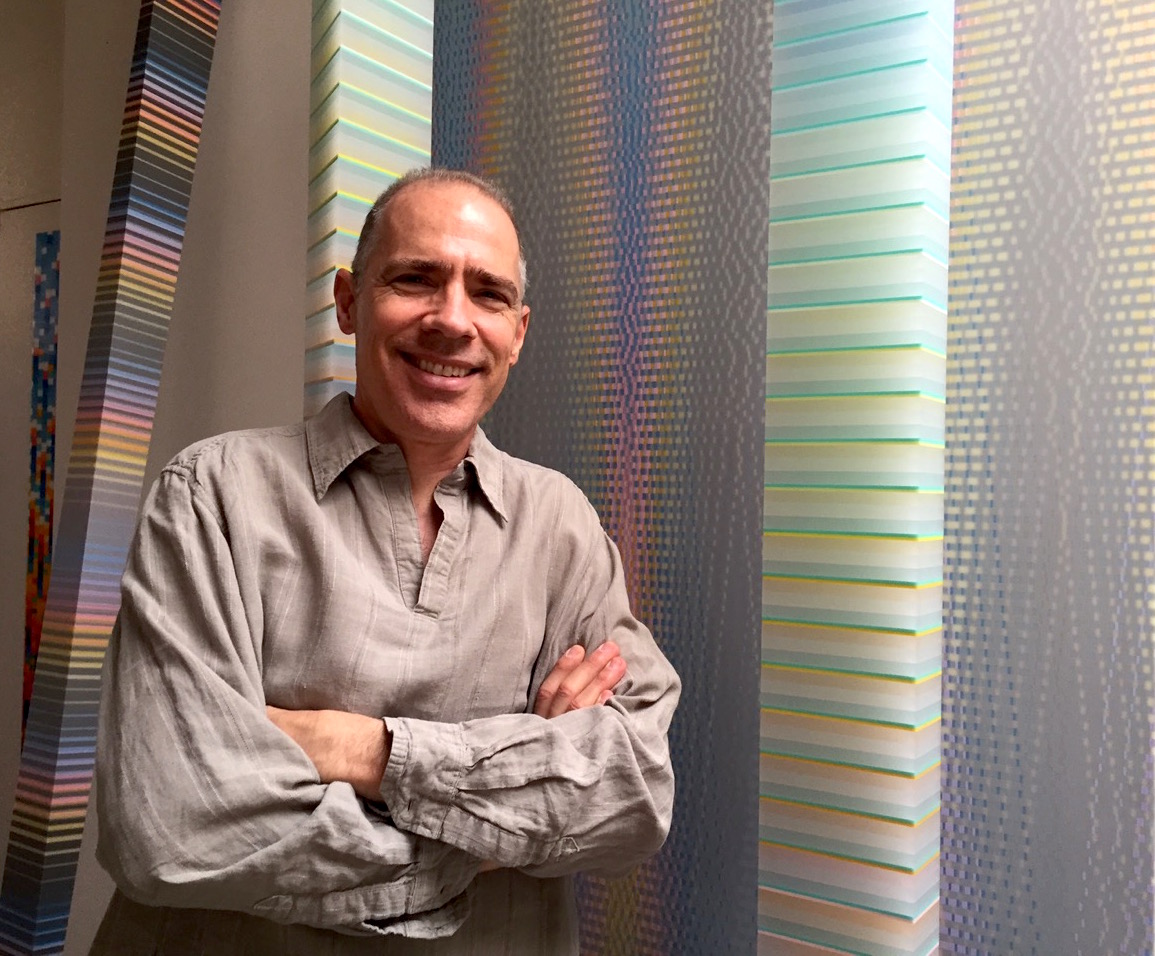 In this interview, we met with Eric Zammitt, who is based in Los Angeles and known for his multicolored wall and three dimensional sculptures. Made of thousands of solid cut bits of colored acrylic plastic that are laminated into unified panels, his abstract, and often minimal pieces, integrate color and pattern to allow viewers to escape from strict literal interpretations of the work, and indulge in the experiential. Zammitt refers to himself as a painter; his “paints” happens to be colored plastic, while his “brushes” are the various industrial tools and adhesives he employs to realize the finished work. Inspired by energy fields, music, light and space, quantum theories, landscape, mosaics, weaving and genetic patterns, experiencing Zammitt’s work is a definitely a transcendent experience. 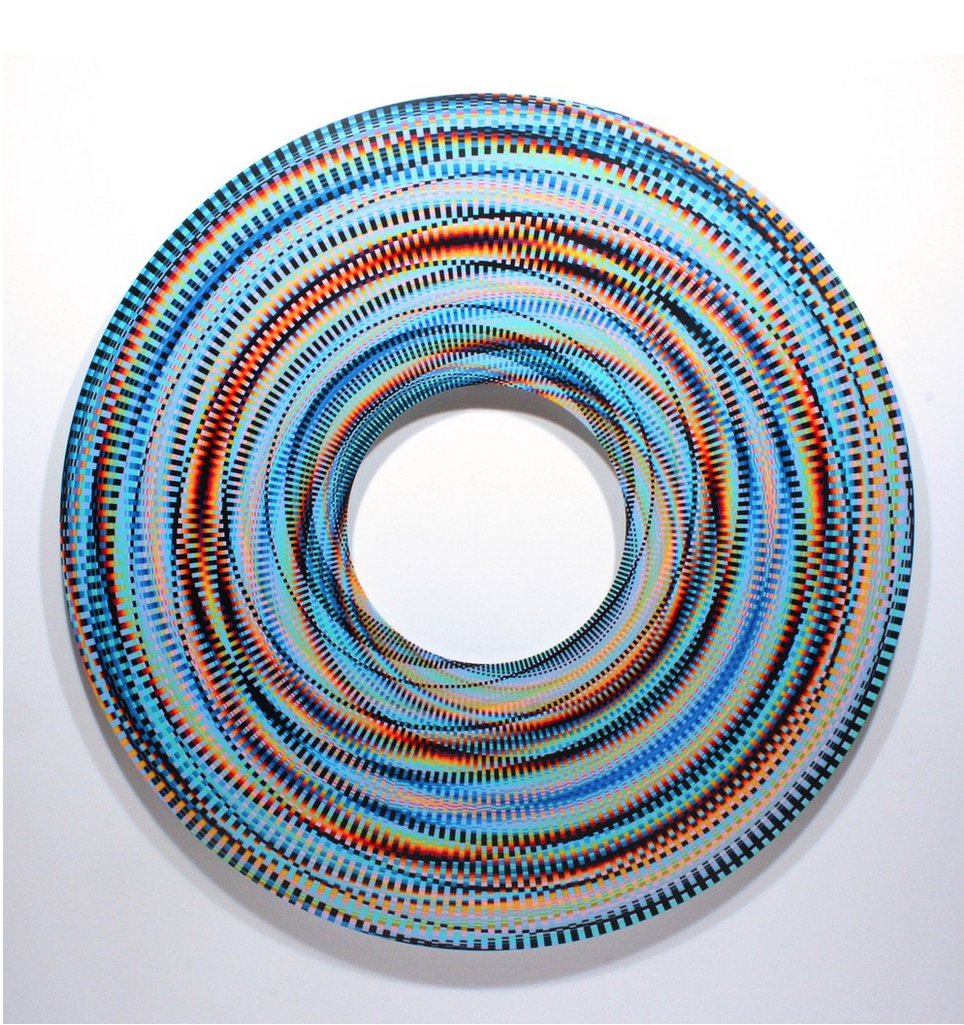 1. What is your first memory of making art?  Painting a picture of a big fish in an art class as a 5-year-old in 1965 at the Pasadena Art Museum. It was located in what is now the Pacific Asia Museum. The Pasadena Art Museum later moved into it’s own custom made building before its demise – that building is now the Norton Simon Museum. Now that I’m thinking about it, an earlier memory is my happiness at succeeding to make black frosting for my birthday cake! I think I was four. I remember wanting black because it felt extreme and had a gravity and mystery unlike any other color. Of course, I didn’t know those words then, but I knew that feeling. 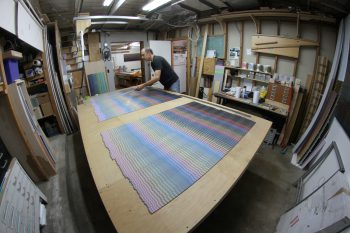 2. What jobs have you done other than being an artist?  I’ve always been self-employed, and never had a regular job. I learned how to build things at an early age from my father and a friend of his, so when it came time for me to make a living I naturally started building things for people. Mostly custom furniture and work on historic homes. I did a lot of Japanese influenced fences and garden structures too. This was my bread and butter work so I could make art. I’d do a job and then take weeks off to make art. Happily, art is now my primary work. I did try being a bicycle newspaper boy when I was about twelve. We lived in hilly Mt. Washington. I lasted about a week!

3. How would you best describe your practice?  Like pushing things off a special cliff where they split into pieces and reorganize themselves as they tumble down, until, at the bottom they’ve end up reassembled, but as completely different objects. Of course, it’s not that easy. It takes weeks for work to tumble down that hillside. Put literally, I’m layering sheets of colored Plexiglas into cohesive blocks that get sliced into hundreds of pieces and reassembled in different form. The results are usually unpredictable and a source of curiosity and fascination for me. 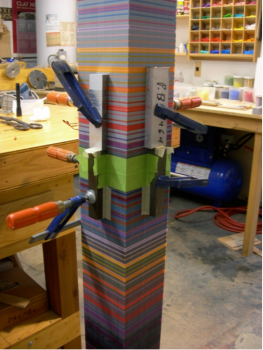 4. What type of art do you most identify with?  Generally, work that comes from outside of language. By that I mean work that is to be apprehended visually; that doesn’t rely on explanation, theory, or concept as essential for its communication. There are aspects of experience that can’t be communicated other than visually, and it’s those communications that interest me most in art, both in the making and viewing. To me this doesn’t rule out representational or narrative types of work, nor work that stimulates or challenges the intellect. Ultimately, life is an experience that occurs to us outside of and distinct from language. Language is what we apply after the experience. Consider the work of Martin Puryear and Ron Mueck as different examples, one abstract, one representational, that set the viewer outside of language for at least a moment if not longer. Work that punches through the chattering mind and grabs the psyche as a whole. For me, this contrasts with much conceptual art which, while sometimes interesting or intellectually amusing to me, often leaves me cold, and often seems to cost me more than I got from it.

5. What kind of patterns, routines or rituals do you have that help aid in your practice? Often, just getting my body into the studio is a challenge. Sometimes I’m busy, or uninspired. But I find if I can just get myself standing in the room, other stuff starts to melt away. I begin feeling the work pull me forward and I start working naturally without effort. Sometimes I clean the studio as a way not just to keep it functional, but to make mental space for the next project. It really helps quiet my mind. It’s like making a clearing for something to pop into being. 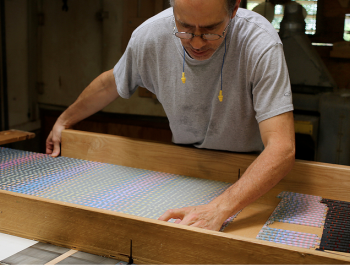 6. What are you trying to communicate with your art? I’m not setting out with a particular communication in mind. I’m hoping something else will communicate through me. I see my materials and process as a vehicle to allow something natural to happen. I find after the fact though, that I tend to guide the process toward a sense of energy, light and atmosphere. I’m most pleased when the viewer is able to feel the sense of another realm or place. Perhaps one we never get to see in our ordinary states of consciousness and busyness. One that reminds us of who we are, where we come from. 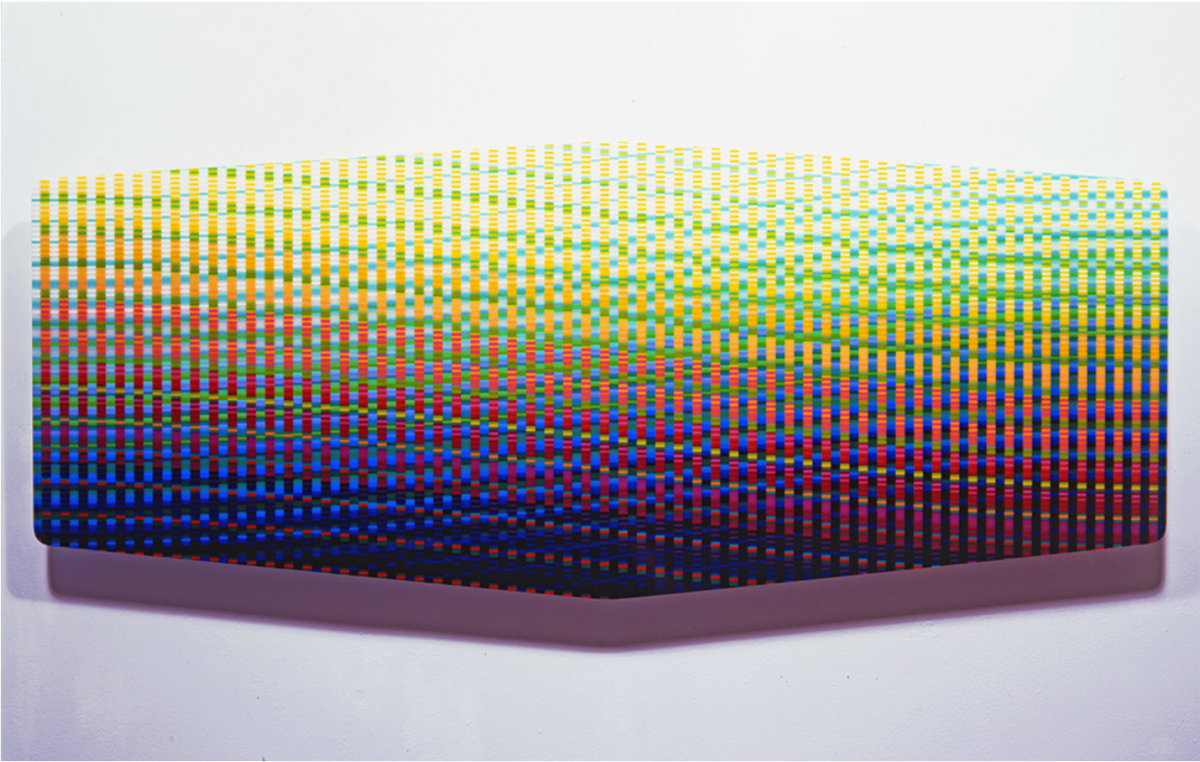 7. What role does the artist have in society?  I think the artists’ role ideally remains always in question. For art, i.e. creativity, is ultimately a state of freedom, despite the norms and expectations of society and the consequences for breaking those norms. On a more everyday level, artists play important roles in society such as providing objects of beauty and wonder, working with children, providing entertainment, bearing witness, being reminders to imagine and question, serving social and political causes, and giving gallery dealers, curators, critics, art fair promoters, shippers, and museum staff jobs! 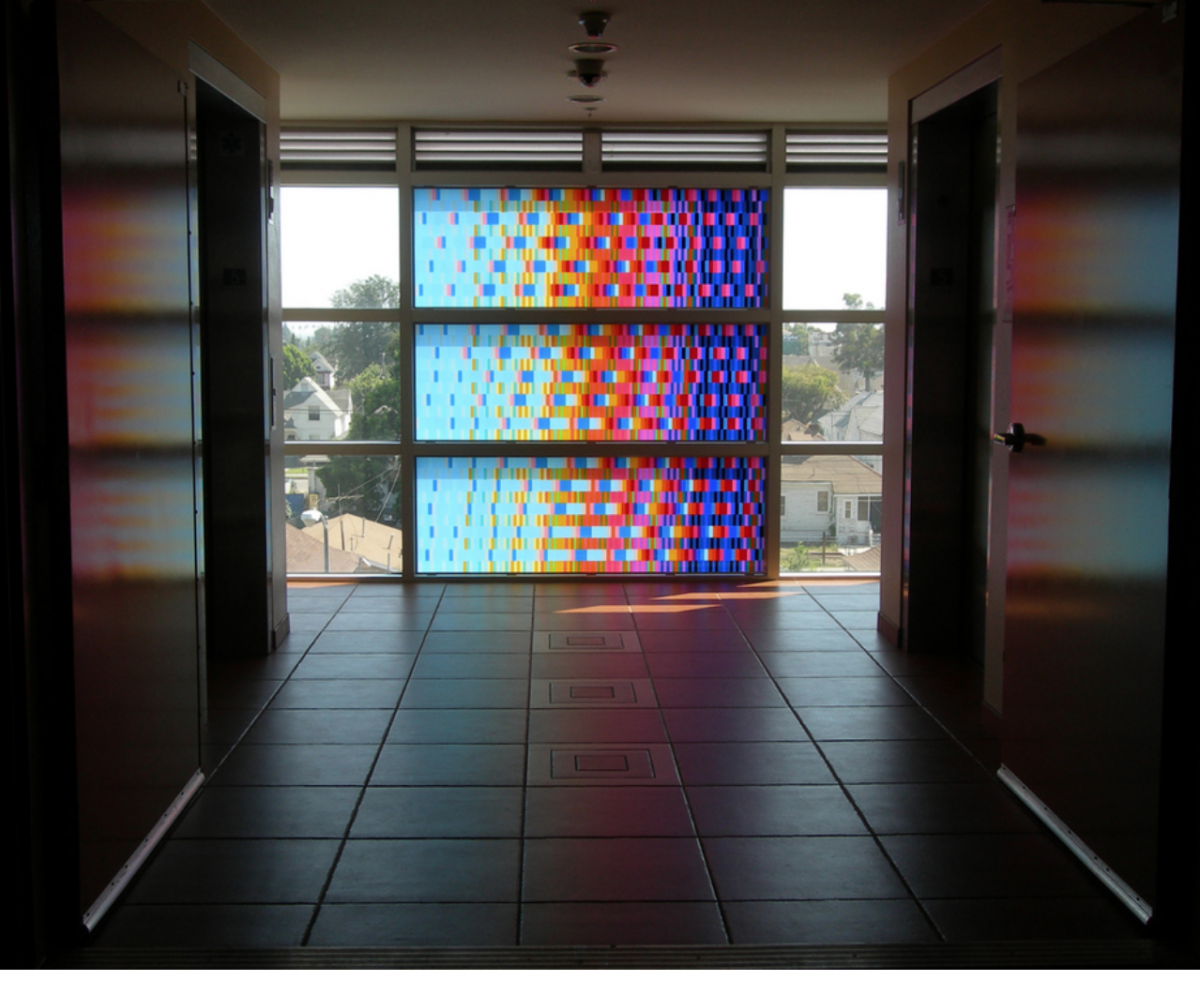 8. Where do you go to get inspired?  I often go for a bike ride up a particular fire road in the Angeles Forest. There are no cars on the fire roads and I can be up in the wild overlooking the L.A. basin in about 30 minutes. It’s a good recharge for me. I watch the forest change over time. See the plants ebb and flow through the seasons. Spy a variety of animals and insects. Watch the light, both sun and moon on the mountains. It’s a never-ending moving tableau of life. And all of this is enhanced by the endorphin charge I get from riding up the mountain. 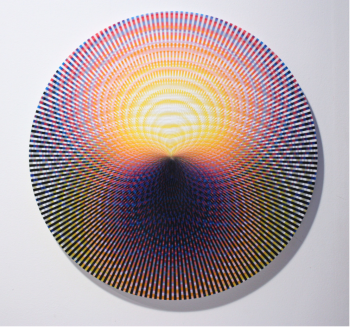 9. How would you describe the current art scene in Los Angeles?  In constant flux! Between the rising cost of real estate, the fraying of the gallery system due to fairs and the internet, the influx of New York money and players, etc., it seems like a kind of big bang event where everything is in motion without any over-arching direction or north star. However, speaking specifically about the gallery scene, perhaps there is one general direction, and that seems to be that it is taking ever more money and social clout to survive, let alone thrive. I sure wouldn’t want to be a gallerist in this environment. It’s got to be tough. It’s just as hard to be an artist, but the pressures are totally different. As for the art of LA as a scene, I don’t know anyone who can put their finger on L.A. art as being of any singular bent or ethos. There’s so much going on, and there are so many artists here from around the country and the world, the internet is everyone’s home, art fairs are everywhere, travel and shipping is cheap… there barely is a “here” anymore. Here has become everywhere. I assert that there is no “L.A. art scene” as such, there is only an art scene, and for the most part, it has no place. 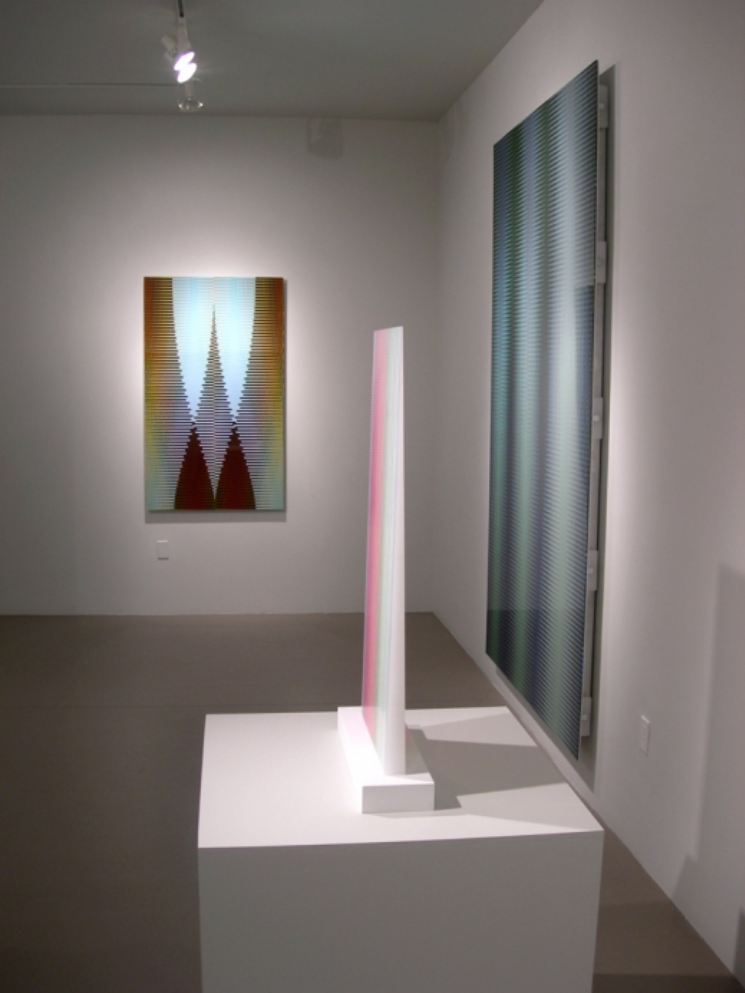 10. Which creative medium would you love to pursue but haven’t yet?  I have a raft of painting ideas. I consider the plastic panels I make to be paintings, and they imply a lot of possibility in paint. I painted a lot when I was younger, but haven’t for about 20 years. I got carried away with plastic. I still have too many ideas in plastic to keep up with, but whenever I move on, it will probably be into paint, bringing with it some of the concepts of process that I use in plastic.

11. What do you dislike about your work?  The great amount of labor required to make a single piece. In the end, it’s about getting to see the work, so taking weeks to get there is a bit of a handicap. However, to make the images I want to see, it’s the most efficient way I can think of to get there. 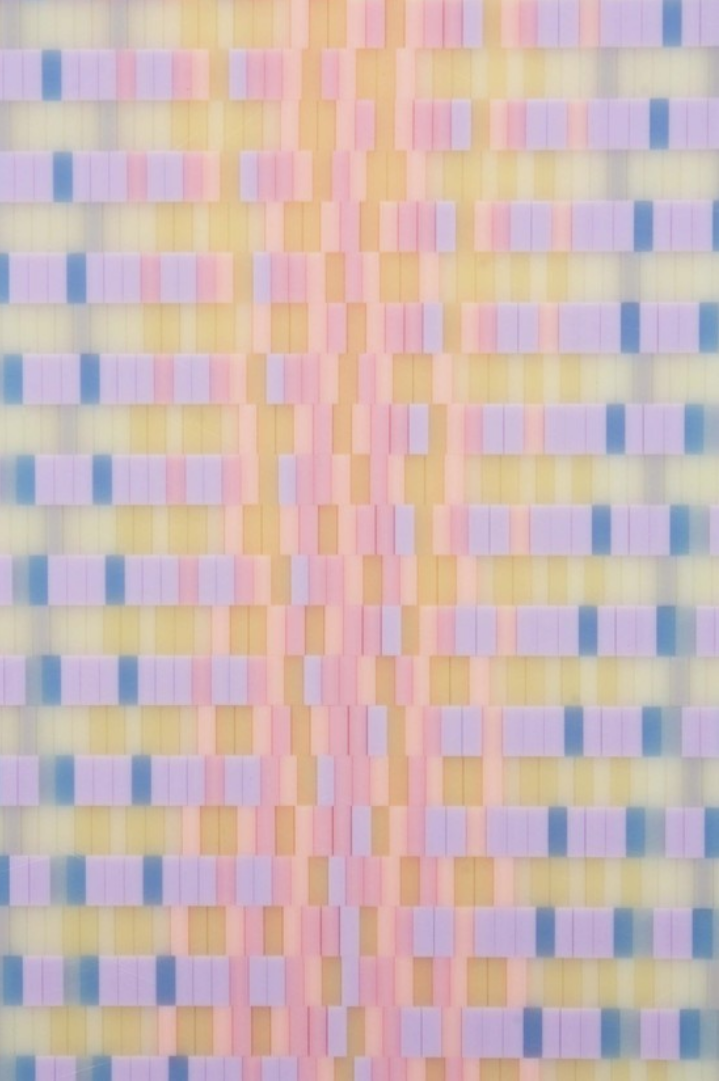 12. What do you like about your work? That the process gives it the element of surprise for me. I’m setting up conditions within which something can happen, or emerge of it’s own nature given the original parameters.

13. What wouldn’t you do without? My tools and machines. From art to functional objects, making something from simply an idea is a freedom and joy I’d never want to live without. 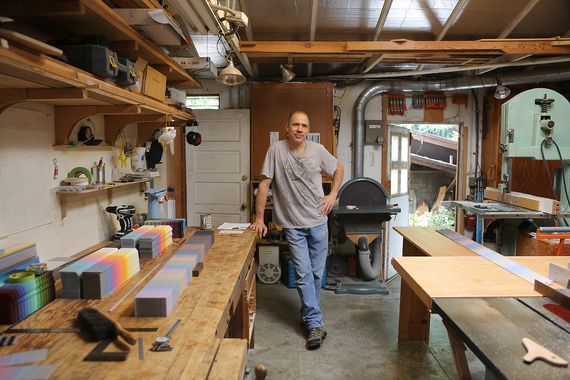